A blog by Matt Browner Hamlin 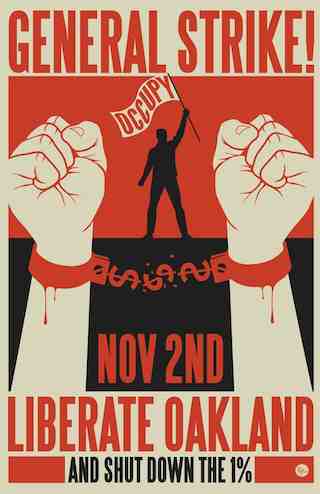 Following last week’s violent police crackdown, the Occupy Oakland General Assembly passed a resolution calling for a general strike on November 2nd. You can watch a video of the Oakland General Assembly voting to pass the general strike here. While general strikes are rare and hard to enact, this one is gaining steam. The International Longshoremen and Warehouse Union has announced that they will stand in solidarity with this general strike. Occupy Oakland will march on the Port of Oakland and shut it down. Having support of the west coast longshoremen is clearly going to be helpful to the Occupy movement’s efforts. Here’s an excerpt from the resolution calling for the general strike:

We propose a city wide general strike and we propose we invite all students to walk out of school. Instead of workers going to work and students going to school, the people will converge on downtown Oakland to shut down the city.

All banks and corporations should close down for the day or we will march on them.

While we are calling for a general strike, we are also calling for much more. People who organize out of their neighborhoods, schools, community organizations, affinity groups, workplaces and families are encouraged to self organize in a way that allows them to participate in shutting down the city in whatever manner they are comfortable with and capable of.